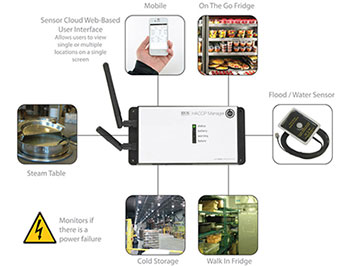 Temperature, moisture and oxygen are major factors relating to pathogen growth in food, and refrigeration plays a key role in keeping food out of the “Danger Zone” that lies between 40°F (4°C) and 140°F (60°C). That’s the point at which bacteria multiplies rapidly, resulting in foodborne illnesses. A couple of new developments in the refrigeration field are proving key to helping companies in the food chain ensure the safety of their product; more are always welcome.

According to the World Health Organization (WHO), foodborne diseases are a growing public health problem worldwide. The United States Food and Drug Administration (FDA) estimates that there are about 48 million cases of foodborne illness annually in the USA, resulting in approximately 3,000 deaths in that country alone.

This past summer at the 2015 Toronto PanAm Games, a new innovation in food safety management was implemented to monitor the food holding areas in the main kitchen and dining room in the Athlete’s Village and keep food at precisely the recommended temperature.

The Bios Professional HACCP Manager 360 is a temperature sensing and alerting device that was pioneered by Thermor Ltd., a firm based in Newmarket, Ontario, Canada. The company’s primary focus is on temperature measurement in the food service industry.

The Bios HACCP Manager 360 uses cloud-based networks that allow food companies to remotely monitor temperature, humidity and the consistency of power at any food storage facility. The secure storage cloud allows users to access live data and stored reports from any browser, and it’s set up to send out live alarms via email, text message or telephone within minutes of a temperature deviation.

Staff are freed up to perform other tasks instead of walking aroundrecording temperatures. Its use at the PanAm Games was especially appreciated with memories of the 2008 Beijing Olympic Games still relatively fresh in people’s minds: that’s when several members of the U.S. Olympic team were stricken by a foodborne illness, sending athletic authorities looking for new innovations to monitor control points for food safety at subsequent events.

TJ Osland, Director of Sales at Thermor Ltd., explains that this automated system for accurate, on-time temperature taking “ensures that dry-labbing and forgetfulness are taken out of the system; staff are freed up to perform other tasks instead of walking around recording temperatures.”

The largest facility so far to employ the monitoring system is the main distribution center for Tim Hortons in Guelph, Ontario, Canada, where it safeguards restaurant food supplies on a 24-hour basis.

Invented by CoolSan Australia, this eco-product was designed to help maintain an optimum refrigerated environment that extends the shelf life of perishable foods and ultimately reduces food waste.

The ChillSafe sachet absorbs moisture from the air to environmentally activate a continual supply of low dose H2O2 Reactive Oxygen Species (ROS) vapor that is released into the refrigerated space for up to 30 days.

There are two agents mainly responsible for the contamination and deterioration of fresh produce:Bacteria and Ethylene. The ROS produced by the ChillSafe sachet continuously work to break down bacteria at a cellular level, inhibit mold growth, attack ethylene and oxidize to carbon dioxide and water; these react with odors to break them down into water vapor.

“This continuous application of the ROS vapor has been scientifically and independently proven to reduce surface and airborne bacteria, mold, ethylene and yeast to safe levels,” explains Thomas deMasi, Co-founder and CEO of CoolSan Australia.

Thomas deMasi notes that one ChillSafe sachet is effective in spaces that measure up to 25 cubic meters in size.

“By scaling up the dosage you can manage any size area, but we have found that it can become costly for smaller operators when you require more than 10 sachets in a cool room. To combat this we have commenced working on our commercial grade product, which is being created to manage spaces of 125 meters cubed and larger.”

ChillSafe recently won the award for Food Safety and Innovation in Non-food at the 2015 Food Magazine Awards, sponsored by HACCP Australia. It is currently being used in Australia and South Africa, with requests to distribute the product in Spain, UK, Dubai and Israel.

CoolSan Australia has worked diligently to test and validate their product in the market, and as deMasi shares, “We are looking to see ChillSafe implemented from Farm to Fork as we can see major benefits for ChillSafe helping to maintain quality in perishable produce as well as the cool room hygiene itself.”

Leah Roberts is an Ontario-based writer and digital marketing expert with a keen interest in food safety and sustainability practices.