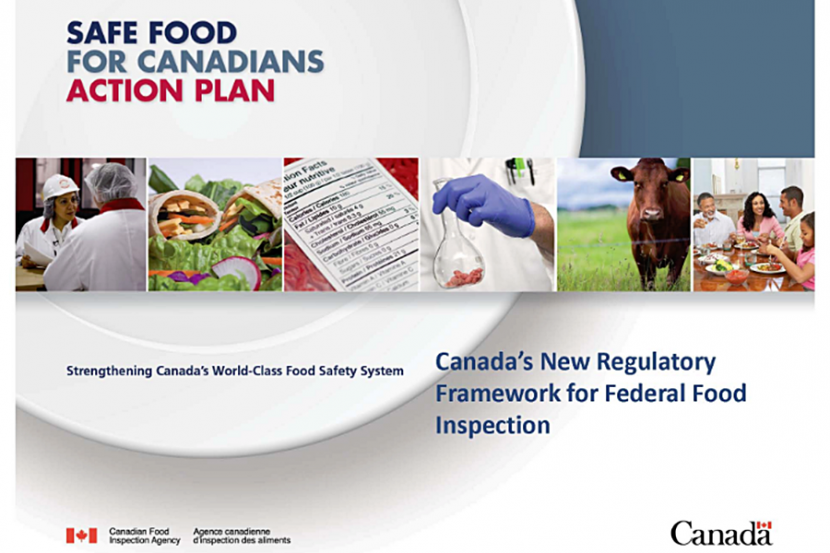 As the name suggests, the purpose of the Safe Food for Canadians Act (SFCA) is to make food safer for Canadians. The Canadian Food Inspection Agency (CFIA) that oversees food safety was originally created under the Food and Drug Act. However, four different Acts also defined and delineated their powers: the Fish Inspection Act, the Meat Inspection Act, the Canada Agricultural Products Act, and the Consumer Packaging and Labelling Act. These Acts were written, and have been updated, at different times over the decades, and so the role of the CFIA was sometimes unclear. The SFCA consolidates the food-related aspects of these four Acts into one.

As noted above, the Act consolidates the provisions relating to food from several different Acts into one. This also clarifies the CFIA’s inspection and enforcement powers, which were inconsistently described in the various Acts. This should enable inspectors to be more efficient, allowing them to make more inspections and thereby increase compliance and food safety.

The new CFIA regulations give the organization the authority to certify all foods for export, as is increasingly required by more foreign countries, streamlining the system and making export easier for Canadian suppliers.

The Act also creates a new review mechanism that avoids the slow and costly judicial review system. Objections to decisions taken by the CFIA can be addressed by this new system for recourse. The parties can still ask for a judicial review if they are unsatisfied with the results.

One of the key focus points for the new regulations lies in ensuring that imported foods meet domestic food safety requirements. Therefore the Canadian government has created a Foreign Food Safety Systems Recognition Framework. The Safe Food for Canadians Act requires importers to be licensed, to develop and maintain a preventive control plan and to have a fixed place of business in Canada, except in cases where the Minister recognizes the other country’s food safety system as equal to the Canadian system. This “framework” addresses how this recognition can be achieved.

The framework applies where:

The three categories of recognition match the above:

The framework does not address anything outside of food safety controls and oversights. Therefore it does not cover such things as labelling, grades or compositional standards. Animal and plant health also do not fall within the framework. The existing standards remain in place and must be met; no preclearance or recognition will be granted on these items.

Many clauses within the Act are not in force yet, awaiting an order from the Governor-in-Council. The section transferring licenses, permits and registrations created under other related Acts into ones that fall under the authorities in this Act was put in force by assent in November, 2012. As well, amendments to the Agriculture and Agri-Food Administrative Monetary Penalties Act and some other coordinating amendments were brought into force at the same time.

Food companies need to mitigate their risk for non-compliance and take a proactive stance to compliance now, instead of waiting for when it becomes enforceable down the road.