Food Safety Takes Off: Regulations, Logistics and the Challenges of Airline Catering 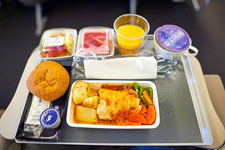 Food Safety Takes Off: Regulations, Logistics and the Challenges of Airline Catering

In 1992, 76 passengers became ill after flying from Peru to Los Angeles. Cholera was traced to shrimp served on the flight and the catering company was assumed to be responsible even though other passengers who ate the shrimp were fine and the same food was provided to other airlines that reported no illnesses.

This story is anecdotal but it underlines the point that airline food safety is a complicated issue involving many variables and stakeholders.  Several countries can be involved with sometimes conflicting food safety regulations. Given the number of people travelling on any one day – nearly 8 million people according to The International Air Transport Association (IATA) – it’s amazing that there aren’t more food-related illnesses on airplanes!

We work to the international food safety guidelines but we are audited by several different companies.

It is difficult to gather statistics on this as the onset of illness may be delayed and reporting is local not international. But Maija Hatakka of the University of Helsinki’s research showed that between 1947 and 2000, there were only 41 outbreaks affecting approximately 9,000 people.

The airline relies on a local catering company, often in a foreign country with different standards of food safety. As well, the climate can be a factor because food can sometimes be left outside if loading is delayed. And there is often a long interval between delivery and service, depending on the length of the flight.

Plus airline caterers don’t have to meet just one food safety standard. Sonia Carrington, Quality Assurance Coordinator at Goddard Catering in Barbados, says “we work to the international food safety guidelines but we are audited by several different companies depending on the preferences of each airline.” She also says that a key to meeting these challenges is having enough pre-qualified suppliers to ensure a consistent provision of safe food.

An airplane is considered a part of the country of registration. But the food coming into the plane is sourced in another country with its own food safety regulations. And that airplane may be flying to yet another country.

The International Flight Services Association (IFSA) has developed the World Food Safety Guidelines for Airline Catering, in association with the World Health Organization (WHO) and other stakeholders. These guidelines are based on HACCP. As well, they echo the US Food and Drug Administration’s Food Safety Modernization Act’s approach to pre-clearing foreign suppliers and having proactive response plans in place.

The WHO also publishes a Guide To Hygiene and Sanitation in Aviation. This focuses on water and cleaning/disinfecting only. While this appears limited, these are very important considerations because of the logistics of air travel.

The IATA’s Cabin Operations Safety Best Practices Guide includes a long section on food safety. They list the key players, other than the cabin crew, who are involved in food safety as:

And while these documents do not have the force of law behind them, they do provide a comprehensive list of guidelines for ensuring food safety is a priority with all personnel involved in handling food destined for passengers and crew in the air.

Lauren Solar is a freelance writer and editor with more than 30 years of experience covering issues in the field of food safety.